We compare transcriptome data from matching primary cell types in human, mouse, rat, dog, and chicken. While we found that the transcriptome measured by CAGE for the same cell type differed markedly between species, we identified a core regulatory network defining each cell type that is common between species. In general, the genes encoding products involved in RNA biology in the cell nucleus were found to be activated consistently in the same cell type regardless of the species.

By applying short RNA-sequencing and Cap Analysis of Gene Expression (CAGE) we have generated expression profiles of mature miRNAs and their primary transcripts across a large collection of primary cell types. CAGE has also allowed us to map their promoters. We show that miRNA promoters are highly conserved, that the expression profiles of the mature and the primary transcript are correlated and that miRNAs originating from the same polycistron are highly correlated. We present the data as a web resource to the research community. 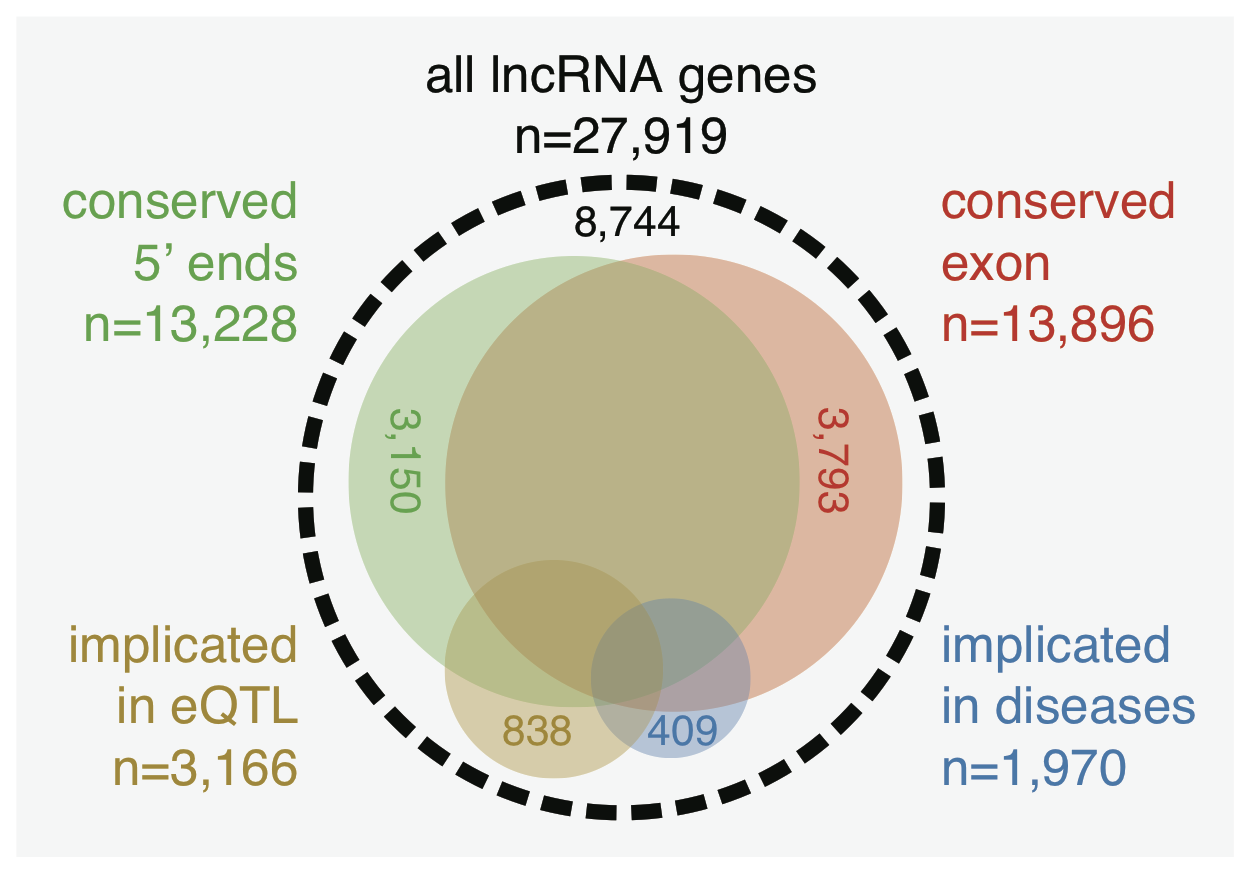 There is a strong debate on whether the thousands of long non-coding RNAs transcribed from our genomes are functional or simply byproducts of a noisy transcriptional machinery. Scientists from the RIKEN-led FANTOM5 consortium used a technology known as Cap Analysis of Gene Expression (CAGE) to build an atlas of human long non-coding RNAs with accurate 5’ ends and summarized their expression patterns across the major cell types. In the work, published in Nature, they intersected this expression atlas with other genetic and genomic datasets and suggested many of these long non-coding RNAs might be functional. 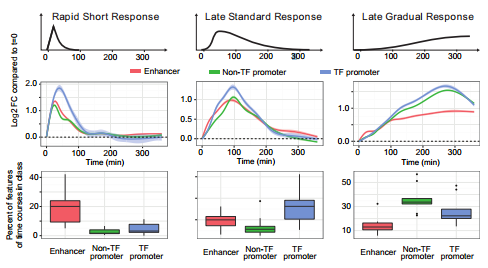 Exploiting the fact that active promoters and enhancers are transcribed, we simultaneously measured their activity in 19 human and 14 mouse time courses covering a wide range of cell types and biological stimuli. Our analysis suggests a highly generalizable model in which enhancer transcription is the earliest event in successive waves of transcriptional change during cellular differentiation or activation. 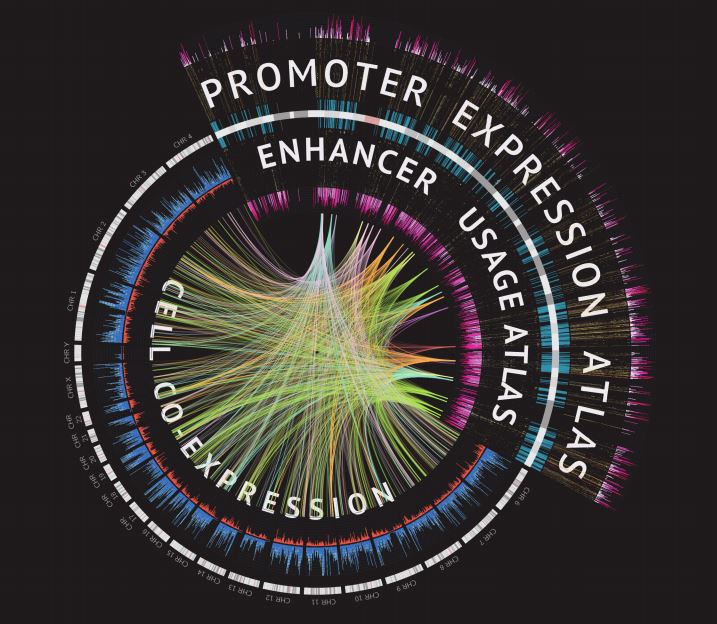 Promoter and enhancer atlases across the human body 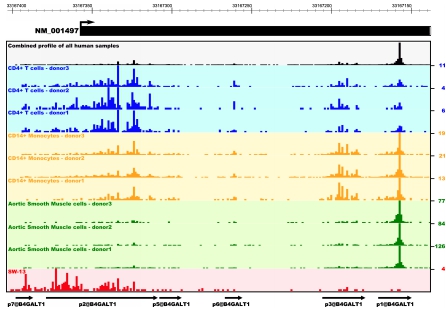 Cap Analysis of Gene Expression (CAGE) across a large collection of primary cell types has revealed many mammalian promoters are composite entities composed of multiple closely-separated TSS, with independent cell-type-specific expression profiles. The FANTOM5 promoter centric expression atlas provides expression profiles for the majority of coding and non-coding transcripts in the human and mouse genomes. 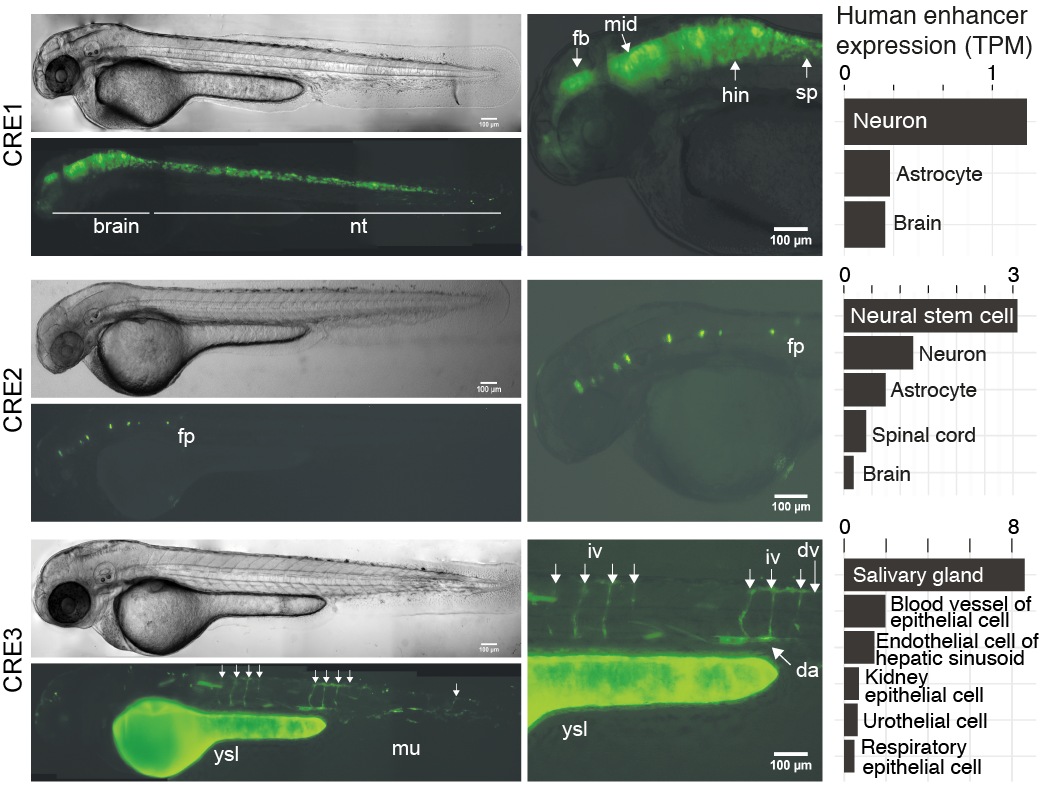 An atlas of active enhancers across the human body.

Enhancers control the correct temporal and cell-type-specific activation of gene expression. We have made an atlas of active enhancers across the majority of human tissues and cell types. The atlas is used to compare regulatory programs between different cells, to identify disease-associated regulatory single nucleotide polymorphisms, and to classify cell-type-specific and ubiquitous enhancers. 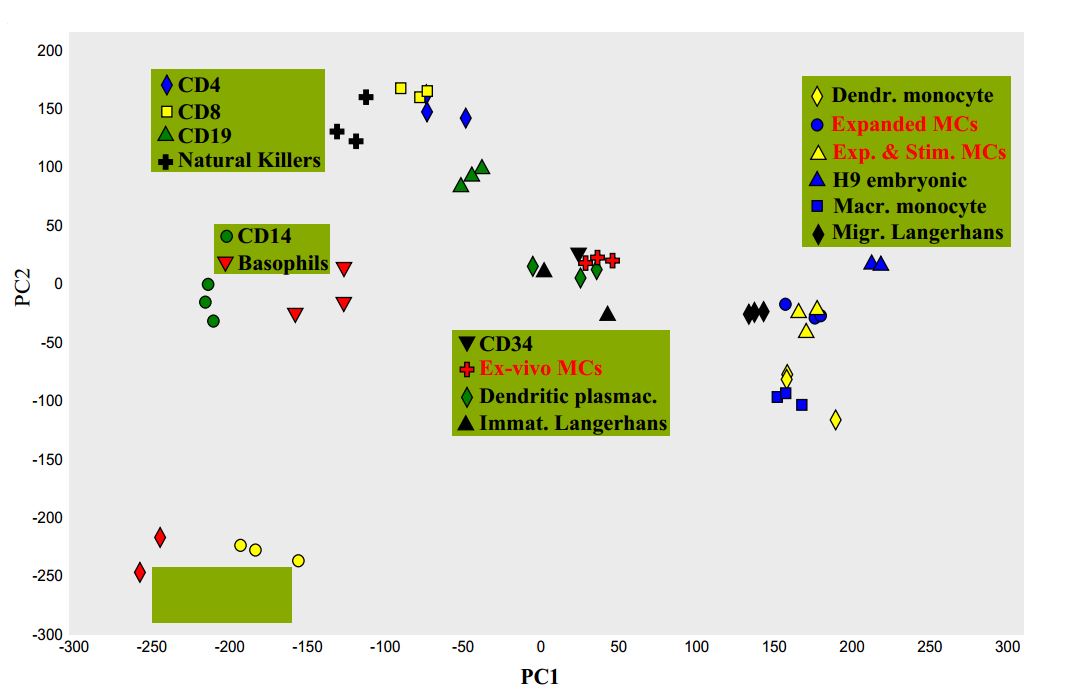 Redefinition of the human mast cell transcriptome by deep sequencing.

Using freshly isolated skin-derived Mast cells (MCs) FANTOM5 reveals a comprehensive view of the human MC transcriptome. Mast cells are unique in the hematopoietic lineage and are only distantly related to basophils. We also show that mast cells express BMP receptors and that BMPs can promote survival and recovery to stimulation of human MCs. 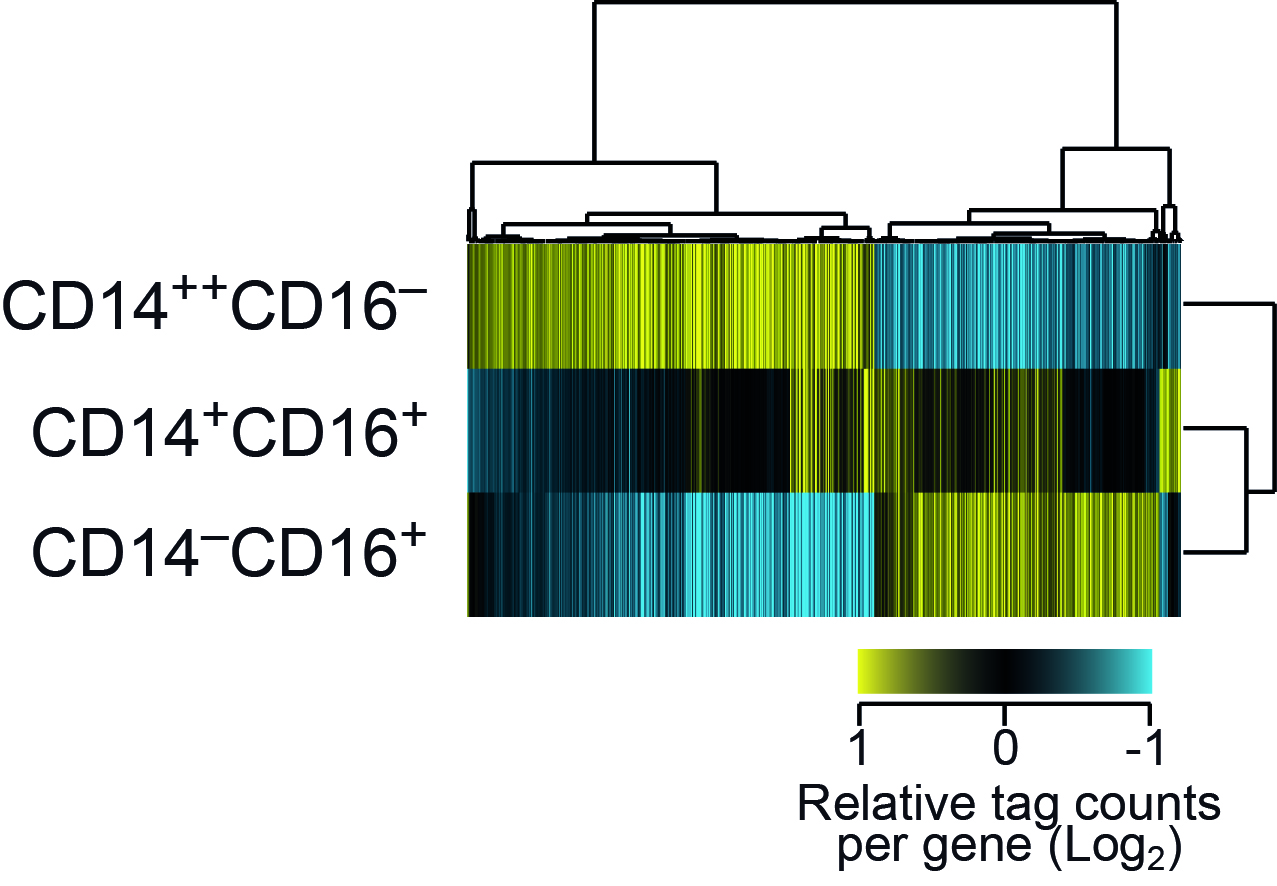 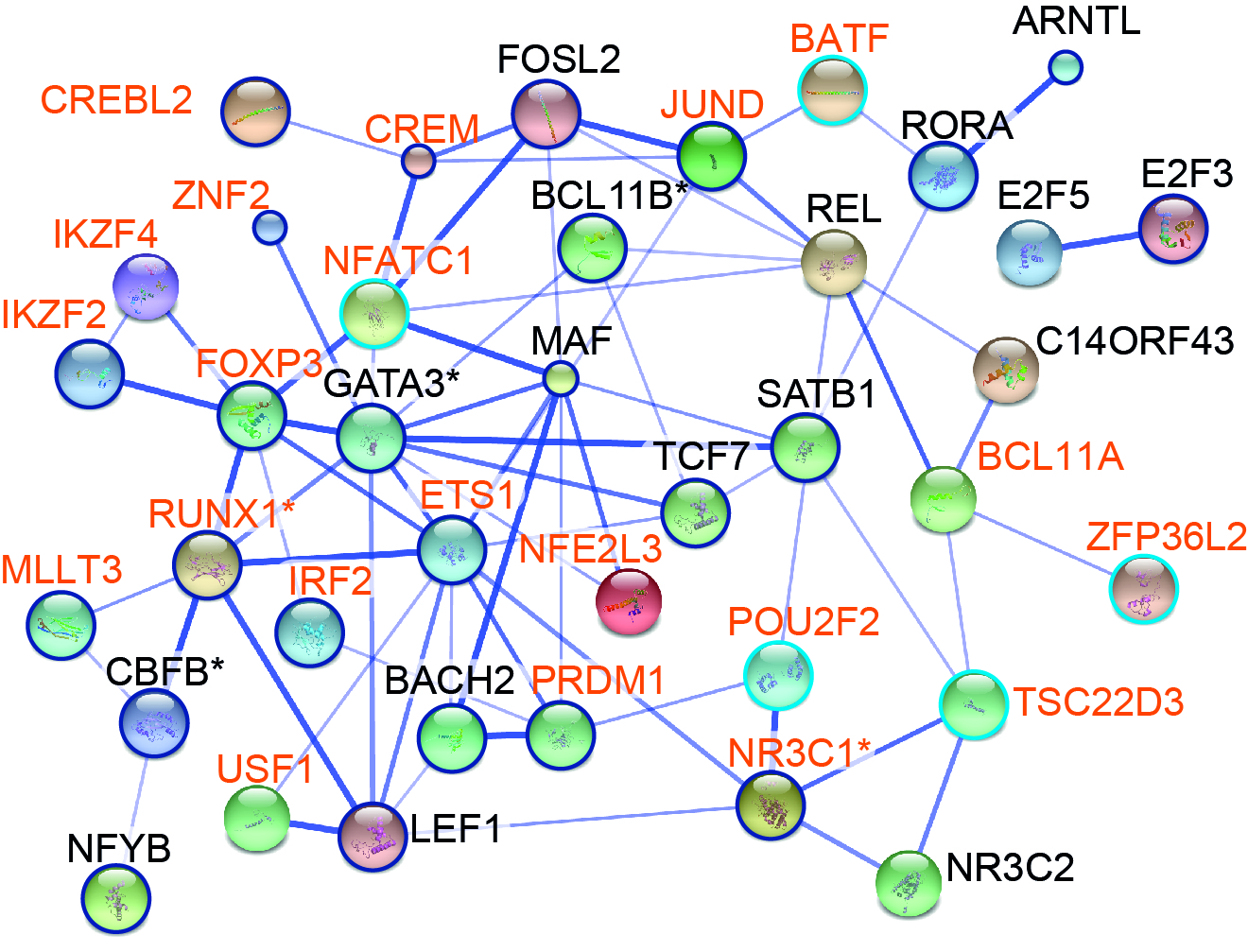 The enhancer and promoter landscape of human regulatory and conventional T cell subpopulations.

Their ability to avert immune reactions makes regulatory T cells (Treg) highly interesting for clinical application. This FANTOM5 study investigates transcription factor networks in naïve and memory Treg and their conventional T cell (Tconv) counterparts both before and after in vitro expansion and shows that in vitro expanded Treg do not dramatically change their Treg-specific effector molecule repertoire. 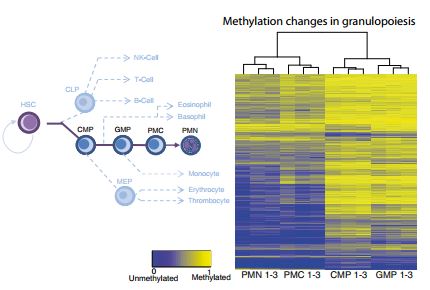 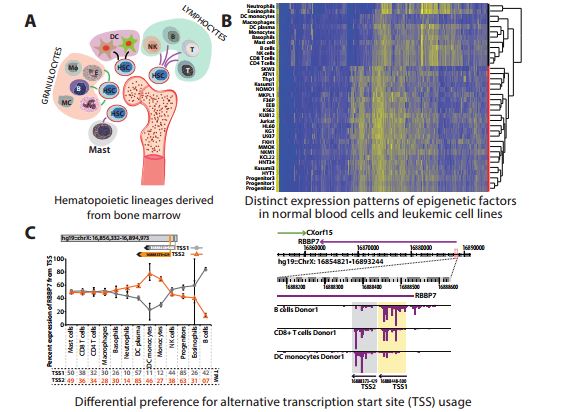 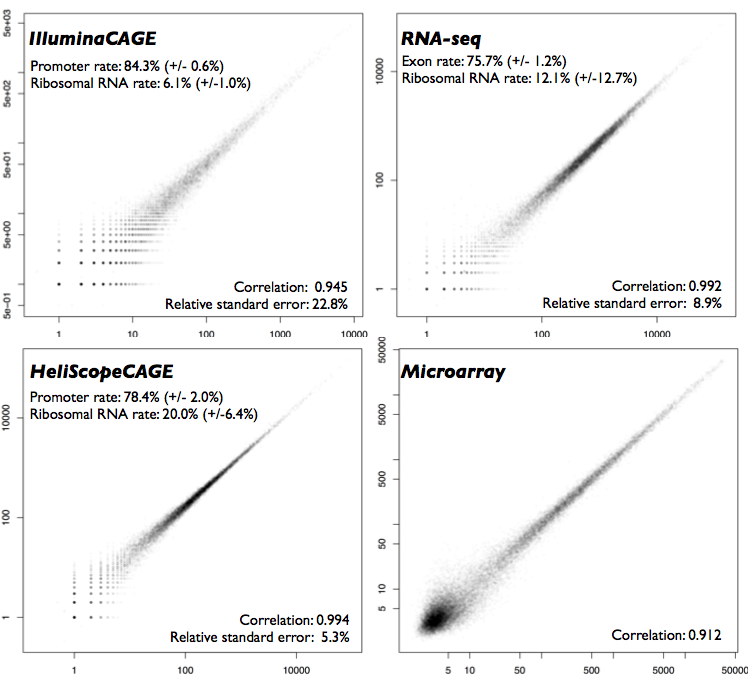 We compared CAGE using both 2nd and 3rd generation sequencers and RNA-seq using a 2nd generation sequencer based on a panel of RNA mixtures from two human cell lines to examine power in discrimination of biological states, detection of differentially expressed genes, linearity of measurements as well as quantification reproducibility. The result provides a perspective on performance of these platforms, which will be a baseline to design further experiments to tackle complex transcriptomes uncovered in a wide range of cell types. 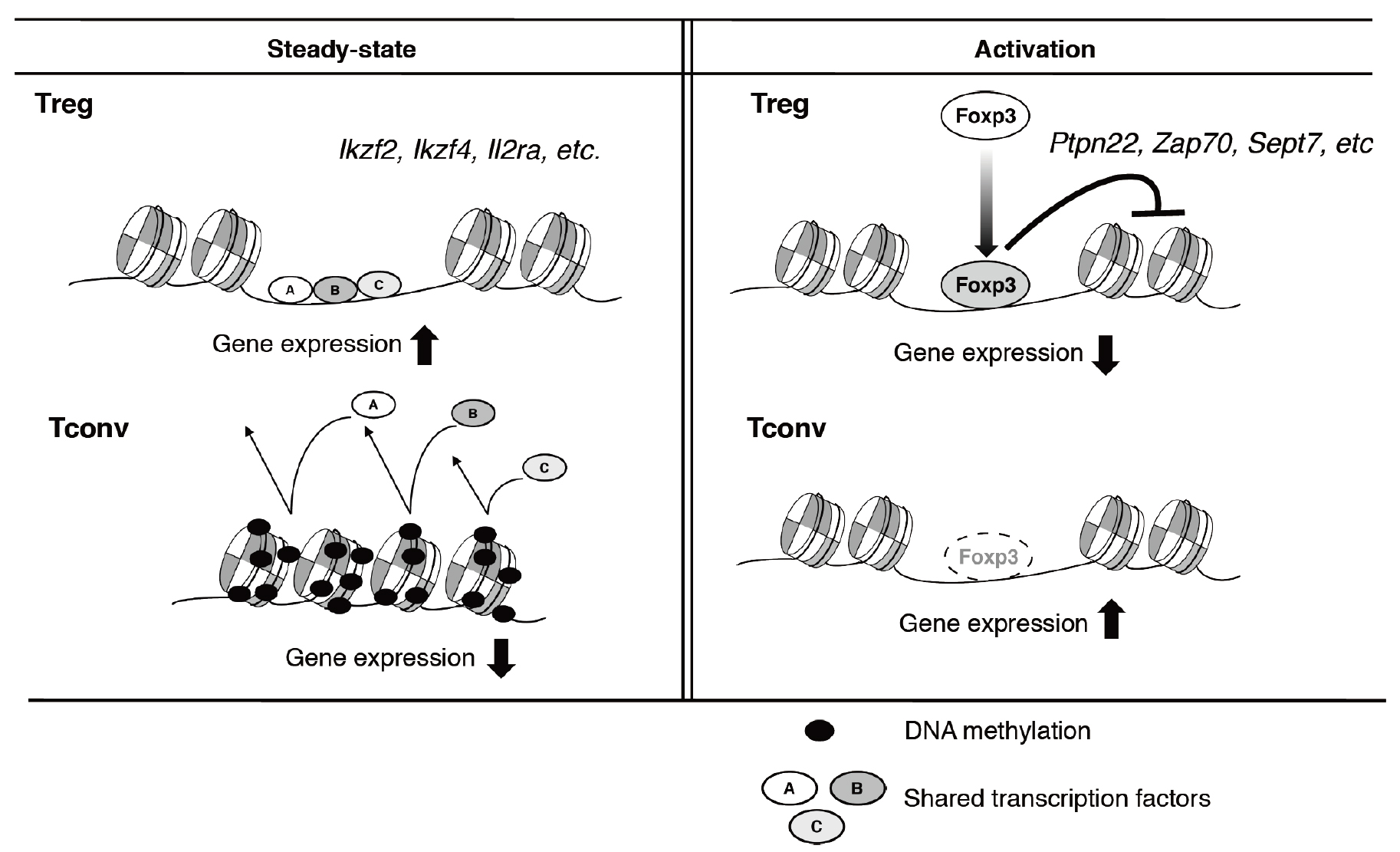 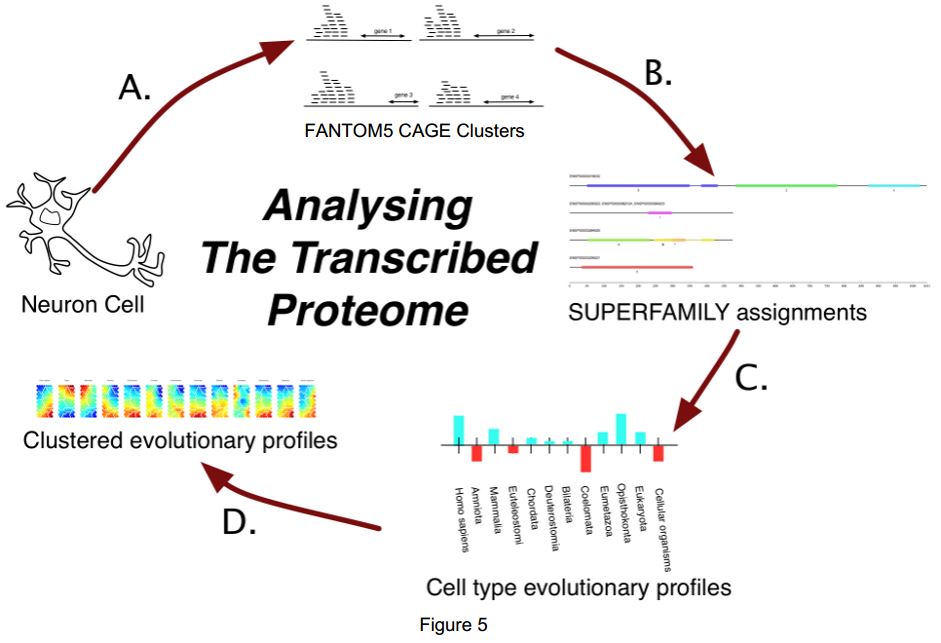 The Evolution of Human Cells in terms of Protein Innovation

Combining FANTOM5 CAGE data and protein domain annotation we are able to get a view on how different cell types have evolved. We are able to identify known evolutionary events as well highlight other novel events that until know have remained undetected. 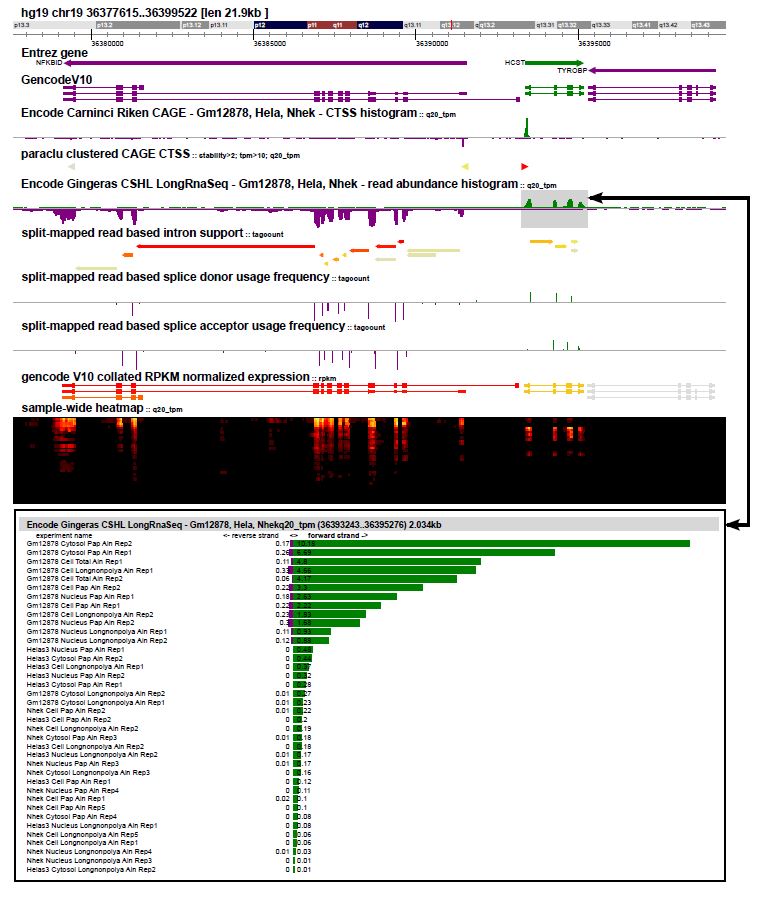 Next generation sequencing protocols such as RNA-seq, ChIP-seq, DHS-seq and CAGE across large sample collections are generating a wealth of data to elucidate genomic function. To facilitate interactive comparison of results across 1000s of NGS experiments we present ZENBU, a web application combining data integration, and data analysis into a genome browser with enhanced gene expression and epigenomic visualization capabilities. 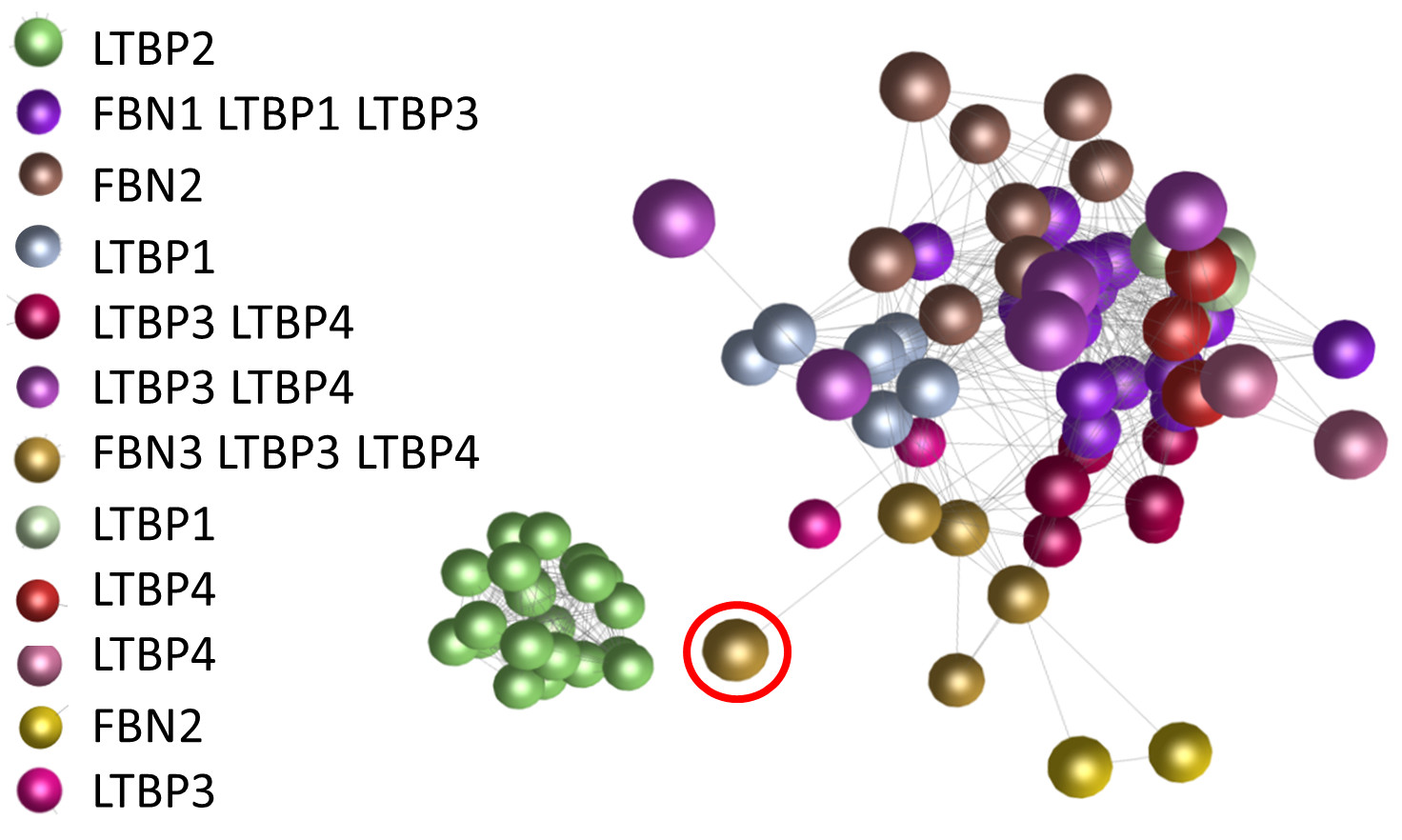 The fibrillins and latent transforming growth factor binding proteins (LTBPs) form a superfamily of proteins involved in the structure of the extracellular matrix and in controlling the bioavailability of TGFβ family members. We present a study of transcription start sites, which suggests this important class of extracellular matrix proteins is subject to subtle regulatory variations that explain the differential roles of members of this gene family. 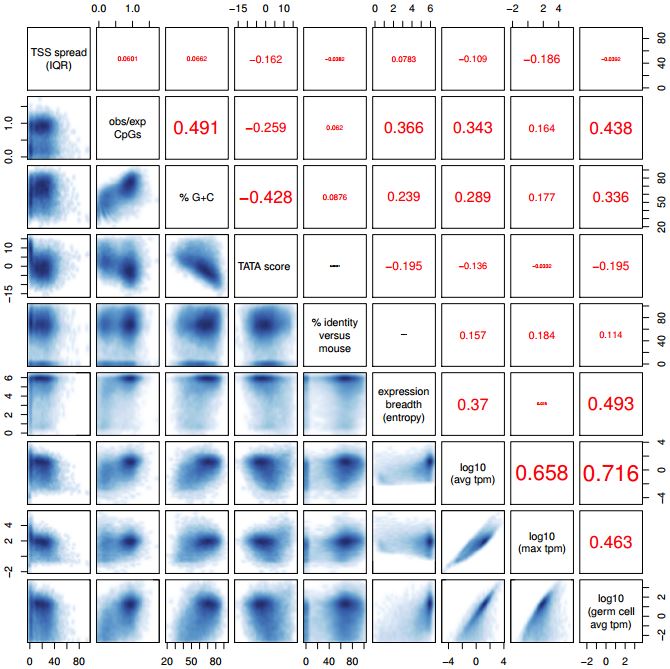 Explaining the correlations among properties of mammalian promoters

Promoters have mysterious variation in CpG richness, TATA signals, evolutionary conservation, expression specificity, and chromosomal spread of transcription start sites. We warn of biases in measuring these properties, show that most promoters have rather non-specific expression, and provide simple explanations for the correlations among the properties. 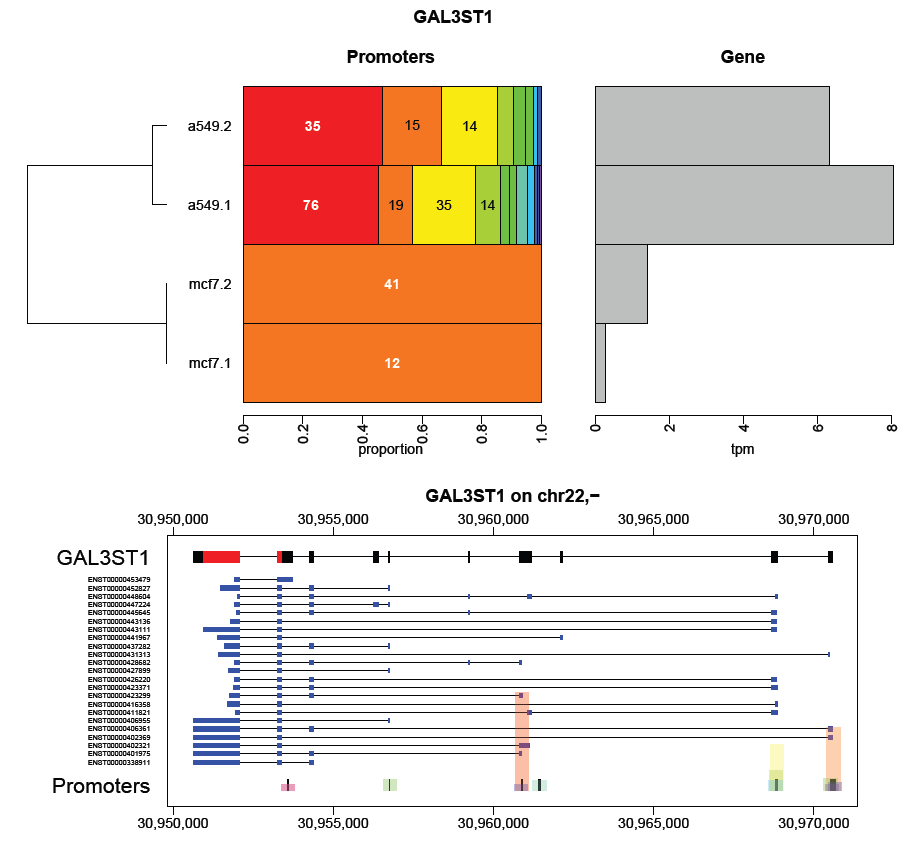 CAGExploreR: an R package for the analysis and visualization of promoter dynamics across multiple experiments.

CAGExploreR is an R package that facilitates the detection and visualization of changes in the relative transcription from promoter regions in multi-promoter genes, all in the context of overall gene expression. Multiple samples can be compared simultaneously. Primarily based on the FANTOM5 promoter set definitions, however other regions such as MPromDb or user-supplied regions can also be used. 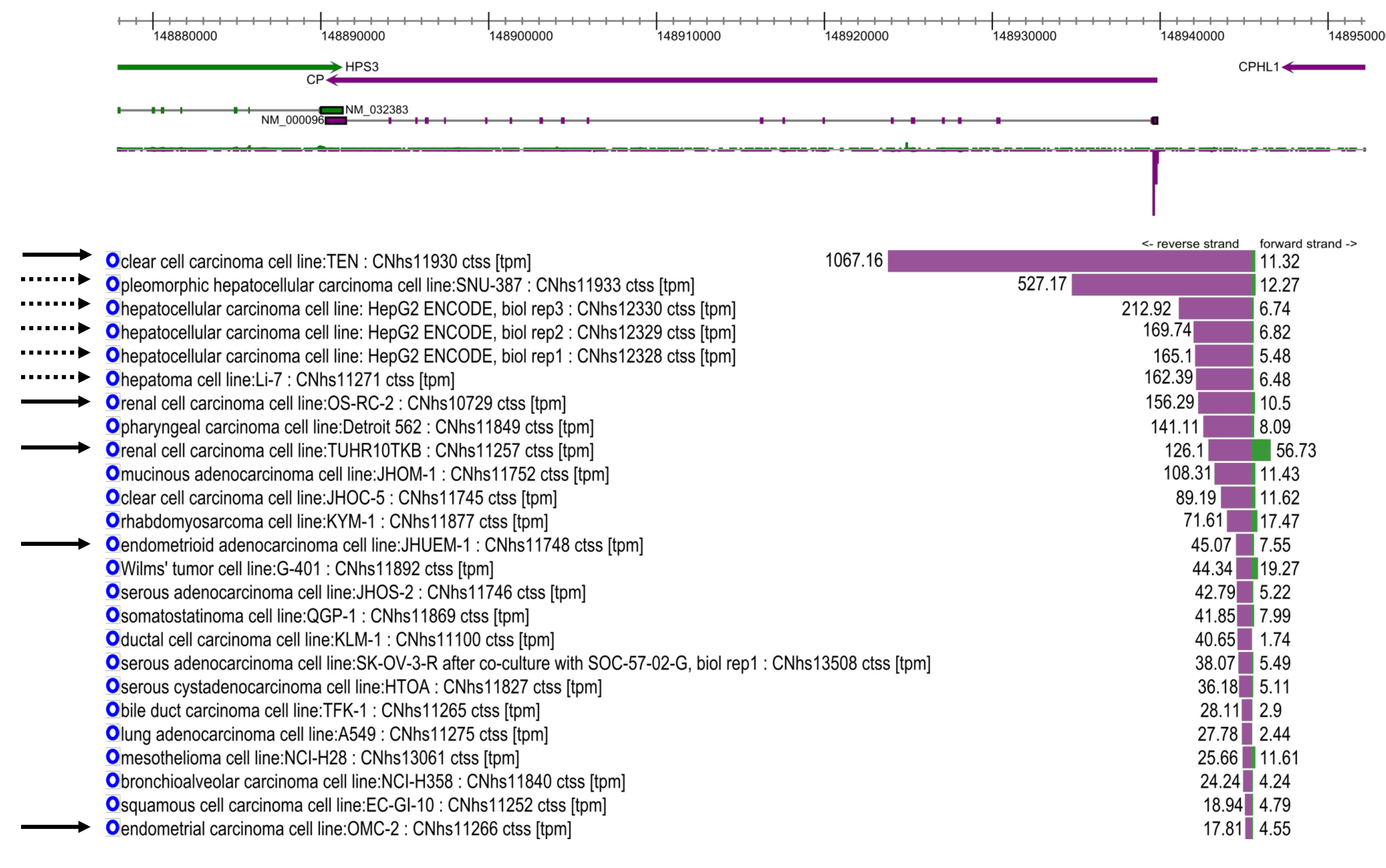 Obesity confers an increased risk of developing specific cancer forms. Increased fat cell secretion of adipokines may promote malignant tumors in obesity via tissue cross-talk. We found ceruloplasmin (CP) expression to be strongly enriched in obesity-associated cancer, and in adipose tissue of obese subjects. We demonstrate that CP is a novel adipokine, with increased production and secretion in obesity.

Methylation of 16% of individual CpGs negatively correlates with neighboring TSS expression. We observed a selection against these CpGs within transcription factor binding sites (TFBSs), being stronger for repressors than for activators, as well as for core TFBS positions than for flanking ones. We suggested that selective methylation of TFBSs preventing transcription factor binding is restricted to special cases and cannot be a global mechanism for transcription regulation. 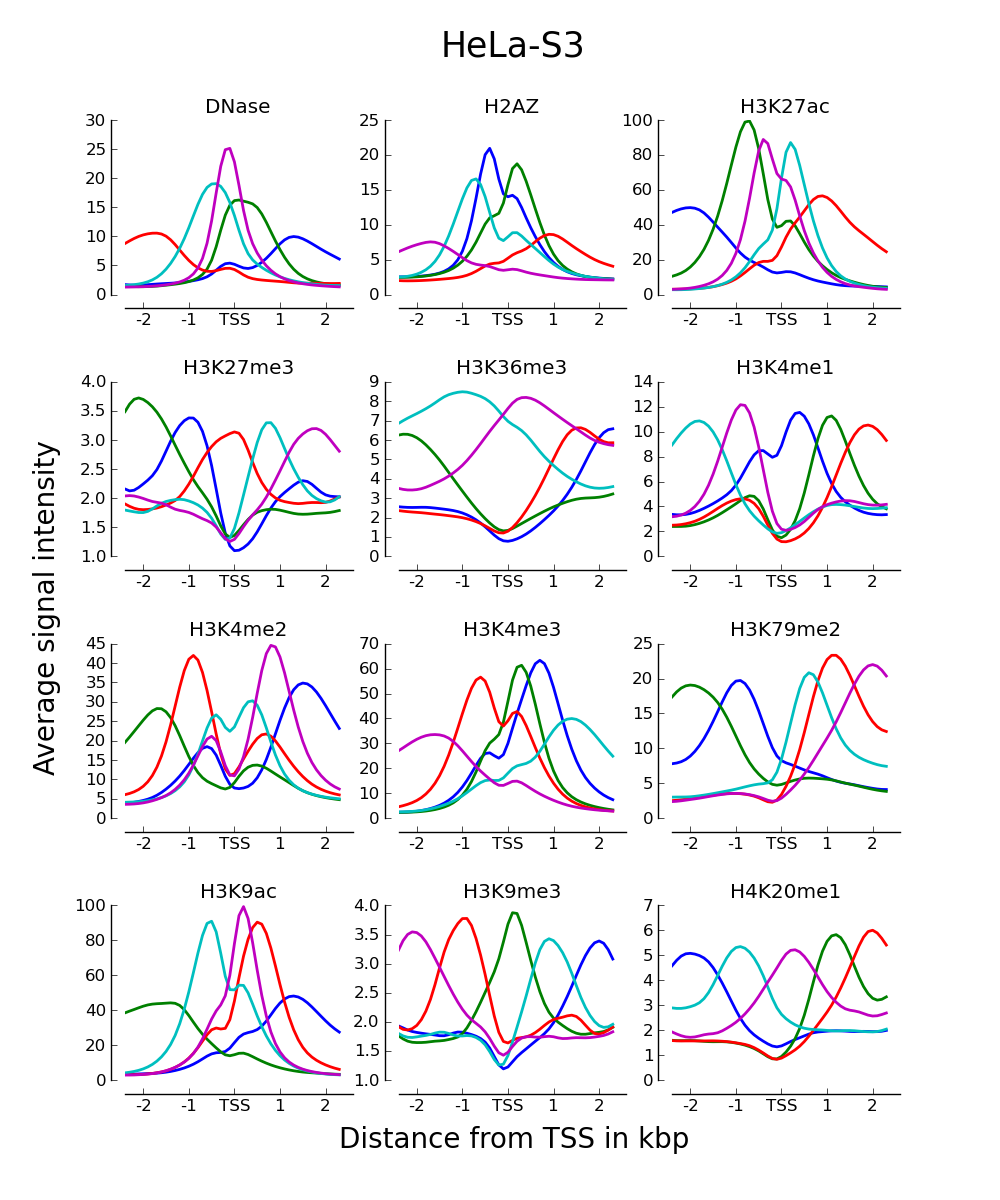 Deciphering the most common modes by which chromatin regulates transcription is an important task for improving our understanding of human cellular biology. Transcriptional data from FANTOM5 is integrated data from the ENCODE project to characterize chromatin features around expressed and repressed transcription start sites in four human cell lines.

We are complex multicellular organisms composed of ~400 distinct cell types. This diversity of cell types allow us to see, think, hear, fight infections etc. yet all of this is encoded in the same genome. The difference between all these cells is what parts of the genome they use – for instance, neurons use different genes than muscle cells, and therefore they work very differently. In FANTOM5, we have systematically investigated exactly what are the sets of genes used in virtually all cell types across the human body, and the genomic regions which determine where the genes are read from. We aim to use this information to build transcriptional regulatory models for every primary cell type that makes up a human.

Using a comprehensive analysis of RNA expression in different cell types, scientist from the RIKEN-led FANTOM5 consortium have made major strides toward resolving an outstanding mystery in biology. In the work, published in Science, they showed that when cells undergo phenotype changes such as differentiation into specialized cell types, the initial activation happens at DNA regions called enhancers, a type of regulatory “switches” which are typically located far from the genes that they activate.

Using Cap Analysis of Gene Expression (CAGE) we have mapped the sets of transcripts, transcription factors, promoters and enhancers active in the majority of mammalian primary cell types and a series of cancer cell lines, and tissues, which is described in two landmark papers in Nature. Around 30 publications from the project cover areas as diverse as primary cells, gene families, genome wide observations on promoter features and new bioinformatics tools.

A collection of FANTOM5 articles published in the Nature Publishing Group (NPG) is provided. 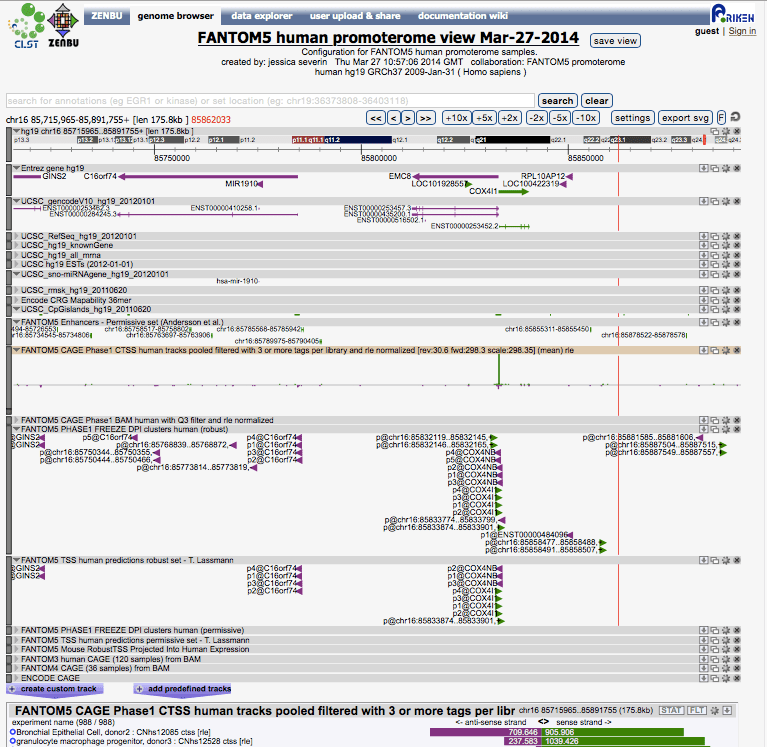 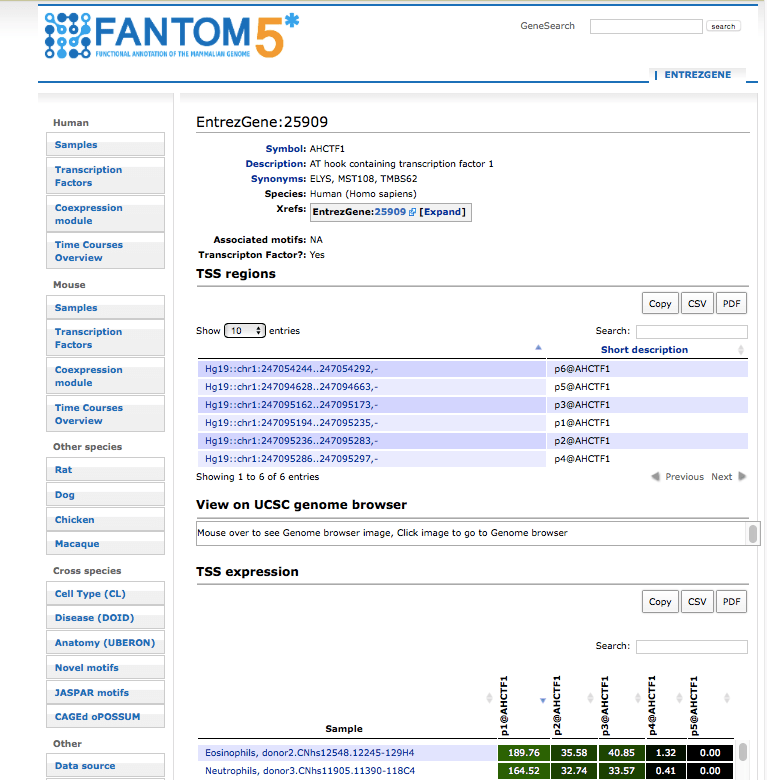 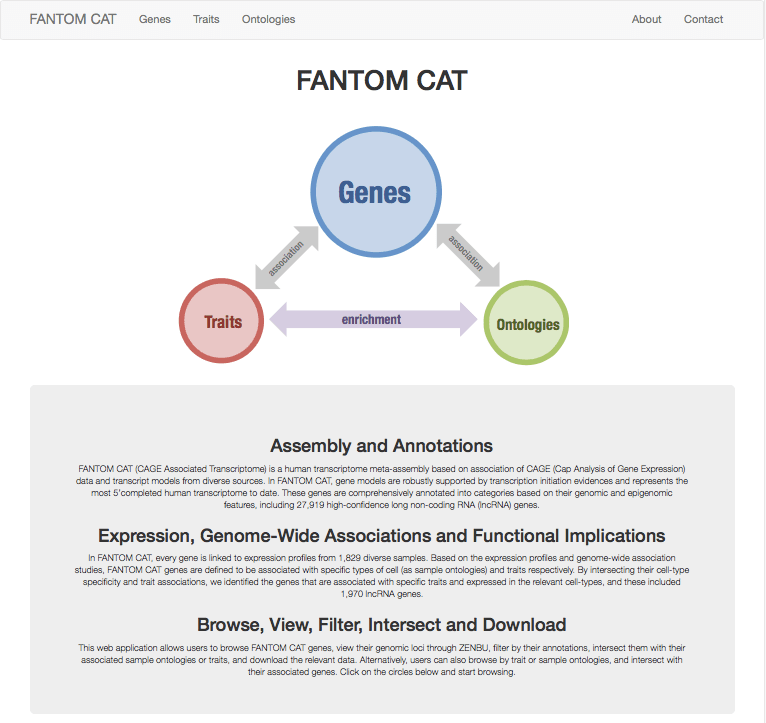 An web application allows users to browse genes, view their genomic loci through ZENBU, filter by their annotations, intersect them with their associated sample ontologies or traits, and download the relevant data. 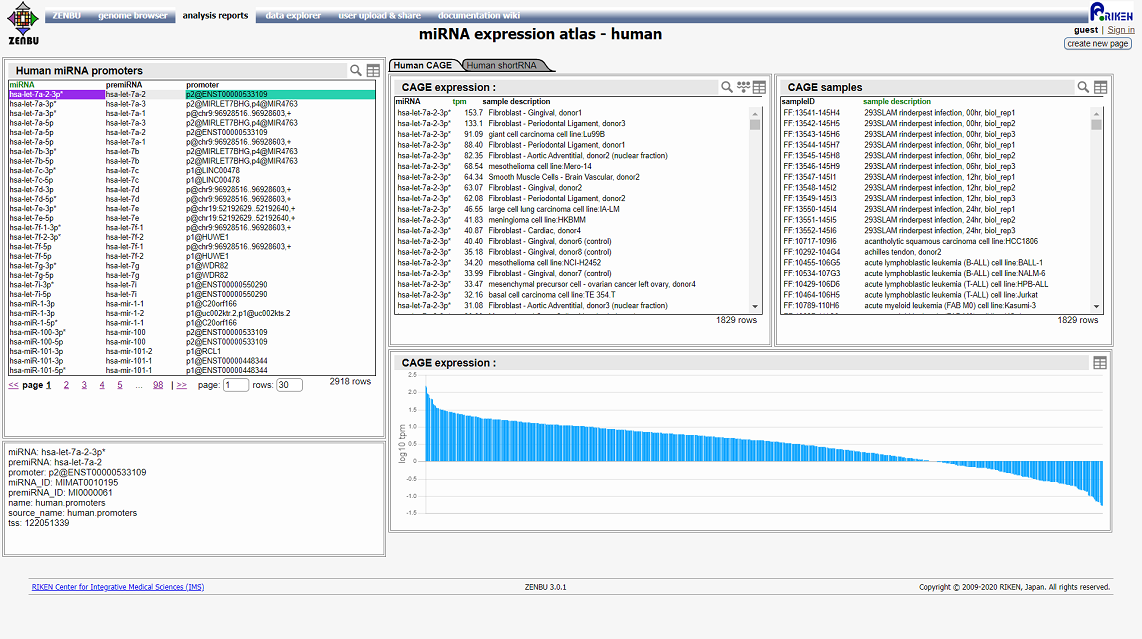 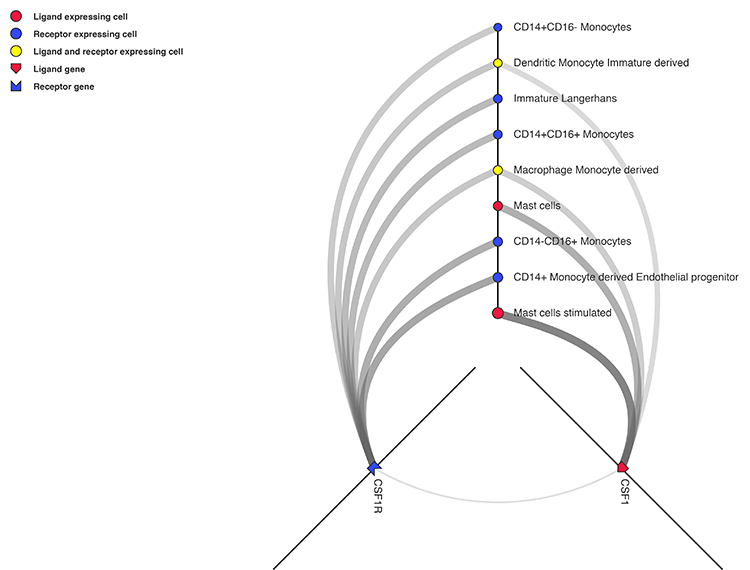 We constructed a signalling map between 144 major primary cell types in human connected through interacting pairs of secreted ligands and cell-surface receptors. Our visualization tool shows what ligands/receptors are present in given cells and what cells are connected to each other by the interacting pairs. Data is also available for downloading. 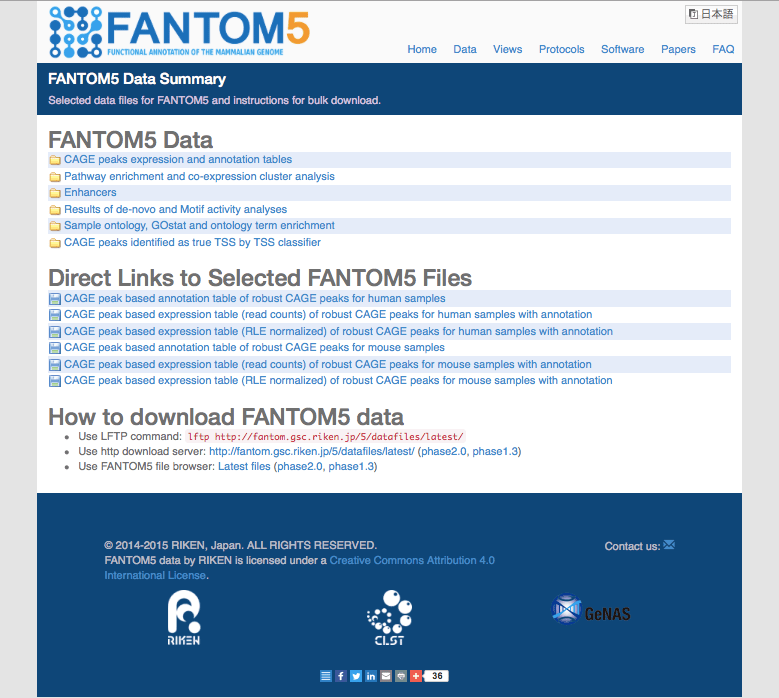 Selected datafiles for FANTOM5. Alternatively you may view the data file server directly at http://fantom.gsc.riken.jp/5/datafiles/

A system for extracting subsets of data from selected FANTOM5 data files including phase 1 and phase 2 expression tables.

A database describing enhancer regions with samples over the whole human body.